Is the trade war more easily won by China or the USA? : Quora

Is the trade war more easily won by China or the USA?

Is the trade war more easily won by China or the USA?

The US cannot win this trade war. It’s not possible. Nope.

It’s not because one country is better or worse than the other.

The US cannot win based on the definition of winning - reduce the trade deficit. Its. Not. Possible.

But first, we need to agree on a basic set of facts. If you don’t agree with these facts, you don’t have to bother reading the rest of the answer.

OK so onto the answer. 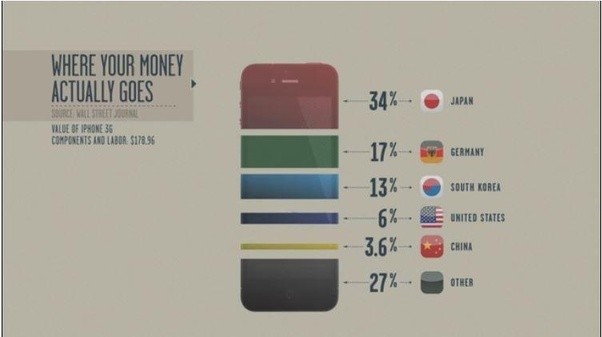 What this means is that even though the iPhone costs ~$650 for Apple to buy from Foxconn, Foxconn only makes ~3.6% of that amount. Apple first of all makes $350 gross profit, and multitude of other suppliers make the rest.

The accounting here is that China imports the camera from Sony, the chip and screen from Samsung, etc, assembles it, and then sells it to Apple for $650. If you could convince Tim Cook to move all manufacturing of iPhones back to America tomorrow (not damn likely) then the trade deficit with China will reduce by about $50 billion, but the trade deficit with Japan and Korea will increase by $25 billion, and with other parts of the world by $23.5 billion. Woohoo!

But wait - this might end up cost more money per unit to manufacture, especially at first. So what happens then? Remember what’s not shown on the diagram is the 35% going to Apple as profit. So that will reduce dramatically as volume reduces. And your damn iPhones (aka communism-phones) will get way more expensive, and harder to buy.

The exact same thing applies to Cisco. And IBM. And so on.

Move all of these company’s manufacturing back from China and yes, the trade deficit with China reduces by 100%; but the overall trade deficit for the US is going to reduce by about 5% - which is the average Chinese value add.

In fact, you can reduce the trade deficit between US and China by 50–70% just by accounting for it differently (correctly). Problem solved.

Rubber - US is the #4 exporter of rubber to China. So if demand for tires decreases due to rising prices…oops.

Textiles - this is even worse. Most clothes are made from cotton - I hope we can all agree on that. The world’s biggest exporter of cotton to China is…*drumroll*…The United States. So if the demand for clothes falls because it costs more money, the United States loses money - oops I did it again!

So no, the US cannot win a trade war with China because the US is the main beneficiary of the current global hegemony. The more they win the war, the more they lose the war.

This is a contest of basically who can punch themselves in the face the hardest - how can you “win” a war like that?

If it’s a face-punching contest you want, then it’s about which citizens can take more pain.

In the US, when gas prices rise, people get very unhappy. Gas is less than 5% of total monthly expenditures for most people, and when it goes up 50%, people tend to drive less, and in the end a 50% increase in gas prices probably hits the pocketbooks by about 2% at most.

Granted, there are many other factors involved in the above, but do remember the graph in the article happens to be an economic boom time.

Now we’re talking about increasing prices of every day goods by 15 - 25% while simultaneously reducing employment in red and purple states. In a democracy. Where’s there’s a consequential election every 2 years including this year.

Their national anthem literally says they will pave the way to tomorrow with their own blood and their own flesh.

It’s a face-punching competition, the Chinese know what it means to lose one - and Americans don’t even know that’s what the competition is about. The ones that do are already trying to back out.

The US cannot win - by financial definition and won’t be allowed to foolish punch its own face too hard before the populace revolts.