The question “Why do climate deniers deny climate change” is logically flawed in that it falsely asserts a premise that is untrue.

Climate deniers much more typically say, the climate has always changed and always will change. The evidence of such is obvious, and typically not in dispute.

From the 1990 IPCC Full Report, Intergovernmental Panel on Climate Change

And a graph showing the history of global temperature. 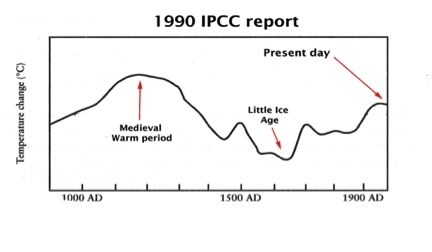 What so called “climate change deniers” think is funny, is that there are humans that believe they are capable of being the cause of change, when clearly, nature is very much more capable of changing the climate than humans are.

You know, “the Believers”. Also referred to by some as “the Alarmists”.

Typically, climate change “deniers” know more about the issue than “the Believers”.

They haven’t just listened to what they are told to believe and accepted it on faith.

They have researched the history of the claim, the politics, the financial influences, and the way the “narrative of belief” has changed over the years.

Not all, but many so called “climate change deniers”, are aware of the history of oil prices, the restrictions on production and embargoes by OPEC that caused two significant oil shortages and energy crises in the United States of America.

And they know of Jimmy Carter’s 1977 US Energy Independence Plan. A document that makes it painfully obvious to anyone with more than two neurons firing, that all of the objectives of climate alarmism are ACTUALLY the objectives of the US reacting to OPECs bullying, and working towards energy independence.

To so called “climate change deniers” it is so painfully obvious that it hurts, when they see people who have taken the hook and actually believe that they contribute to alteration of Earth’s energy budget.

They feel really bad for the people that have, on faith, bought the narrative that the “world needs saving”. And even worse for the ones that are running around trying to convince others. So pathetic.

Let’s put some perspective on the issue.

What is the volume of humans? 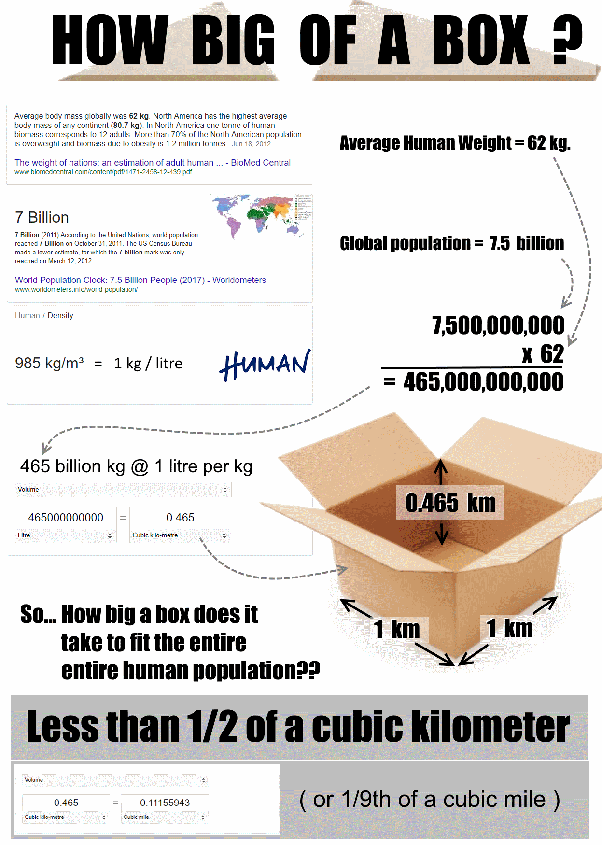 Now, lets compare that to the Earth.

Yes, the numbers are correct.

Humans = One half of one single cubic kilometer.

The Earth is one trillion cubic kilometers in volume and has an average temperature that is in the thousands of degrees.

And that heat is ALWAYS radiating upward and outward from the center, marching it’s way to the surface, through the atmosphere and dissipating in the form of radiation and lost kinetic energy at the perimeter of the atmosphere. 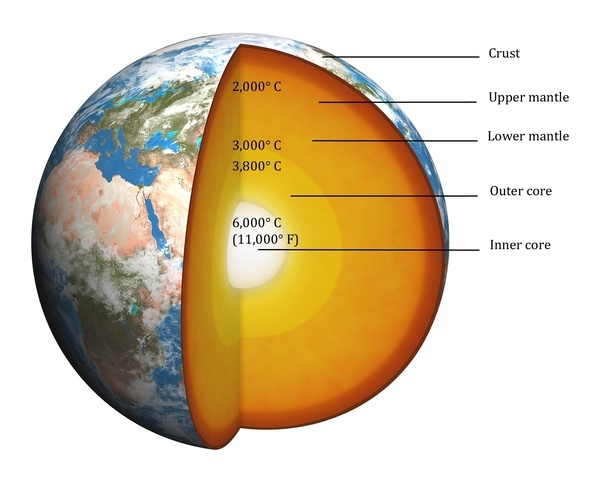 This has been going on for billions of years.

Humans are, to put it bluntly, insignificant in comparison to the outward flow of Energy from the Earth.

“But, but, but….” say the alarmists. Those that have full faith in the narrative contrived and thrust upon them by the government sponsored and funded agencies, “we are trapping the heat from the Sun”.

Where did they get this idea from? From a lab test in a fixed volume experiment in the lab of a guy named Arrhenius back in the 1800’s.

But is the volume of the Earth “fixed”?

Absolutely not. It is in “hydrostatic equilibrium”.

And every once in a while, the atmosphere gets a kick in the ass from the Sun. The Sun has these things called “solar flares”. Solar flare - Wikipedia. They are twisted loops of magnetic energy that stretch out from the Sun by . Often these twisted loops “break”, and there is a “coronal mass ejection. Coronal mass ejection - Wikipedia. They are really big.

And when coronal mass ejections hit the Earth, they add a lot of energy to it, and temporarily the volume of the atmosphere expands. We know this, because the expansion of the atmosphere causes satellite drag. 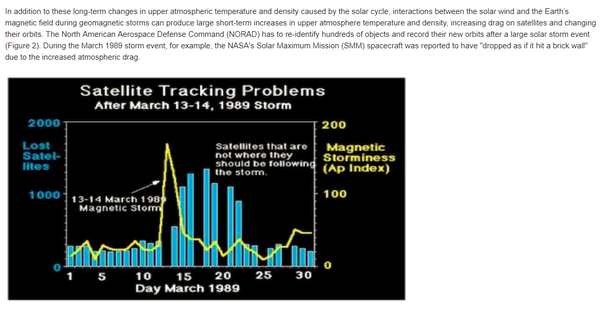 So you see, there is direct, observed evidence that indeed the volume of Earth’s atmosphere is NOT FIXED. It fluctuates. At times, significantly. More information about that here, at NASA’s web page about satellite drag, NOAA / NWS Space Weather Prediction Center.

It is well known that temperature, pressure and volume are tied to one another. It is called the Ideal Gas Law.

Now it is time to connect the dots.

The volume of the Earth’s atmosphere is not fixed.

The Earth’s atmosphere is in hydrostatic equilibrium.

The fulcrum that balances the volume is gravitational energy opposing the pressure.

This produces what is called the “gravito-thermo effect”.

The gravito thermo effect is what determines the temperature of the various layers of the atmosphere. 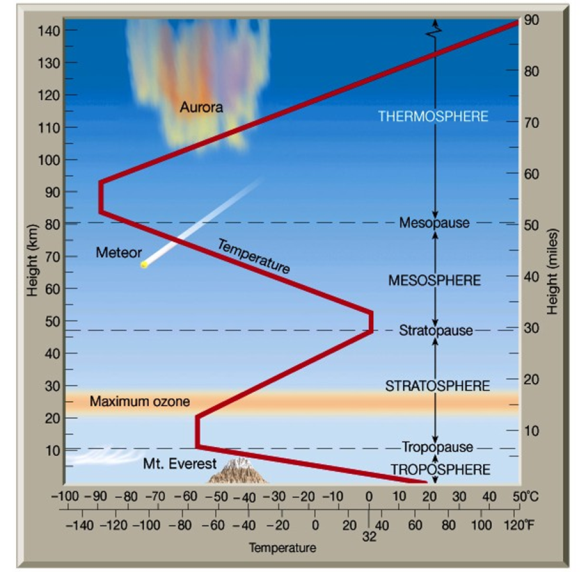 Why don’t we know and understand the gravito-thermo effect better, you might ask, as an alarmist that is starting to wonder if perhaps they don’t actually know enough to support their belief that humans are changing the temperature of a multi-thousand degree, trillion cubic kilometer ball of mass (the Earth).

We don’t actually understand how gravity works. Not very well at all.

The standard model of cosmology is based on general relativity. (Einstein stuff). This is from where we get our best guess at how gravity works, because so far to date, we have not managed to figure out how it works in relation to quantum mechanics.

Our best understanding of gravitational energy is applicable to CELESTIAL BODIES, using their center of mass at a distance. From Encyclopedia Brittanica: 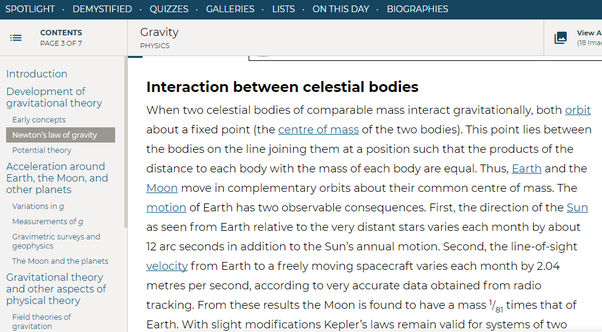 So far there are two dozen CANDIDATE theories. 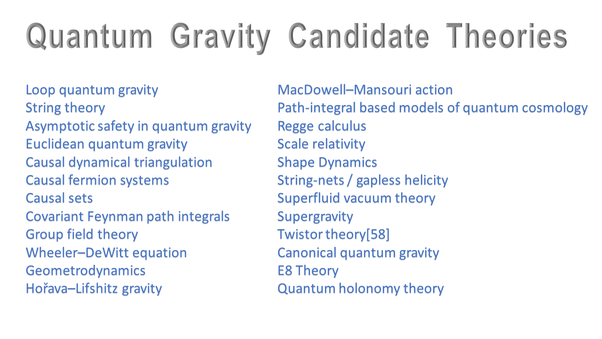 NONE of the theories are clear favourites. NONE are thought likely to be the right one, except by the individuals who think theirs is the best, and each of the theories has supporters.

There is no “consensus”.

And each of the theories has significant cracks in it.

So, back to the original question.